My last post got me thinking about some other activities that the internet has changed. There are a bunch of BIG things that have been changed obviously, but what about little things.

-Learning lyrics to a song- I remember going and buying an album and then being so excited when they decided to print the lyrics in the CD booklet. If it wasn’t for that I would have never been able to sing along with Bone Thugs and Harmony or the John Michael Montgomery fast songs.

-Finding sports scores- When you were waiting to hear the final score from a game, you had two options. You could either wait up for the 11PM news or call a phone number and go thru a ridiculous amount of pushing buttons to get to the team that you wanted.

-Acquiring Movie Times- Nothing was worse then being 14 and wanting to go to a movie. You couldn’t drive to a convenience store to get a newspaper so you had to call the theatre and listen to ads before they started listing the movie and times. Careful not to miss your movies because you’d have to go thru them all again.

-Buying just one song from an album- I remember going to music stores in high school and looking for the “Singles” section so I could buy the one song that I wanted from an album. They rarely had the song. Instead of being let down, I would resort to taping it off the radio. I think half of my collection ended with the beat fading off then, “This is 98.5 KLUC…”. I was never fast enough to hit the stop button.

-Taking a poll of America- Shows like Hard Copy used to have you call in during the show to vote on a subject. It would usually cost a dollar to vote. Can you believe people used to pay a dollar to vote for stuff like this? Even more then that, the answers were usually Yes, No, or No opinion. Why would someone pay to call in and then have no opinion on the matter?

There are plenty of other things that have changed. Calling worldwide? Doing research on electronics before you buy them? Finding info on people, places or things. I dare you to not use a search engine for a whole week.

Any more changes you can think of?

Our Gem this week comes from Brett Dennen. I have been enjoying his album ALOT!! My favorite is Just Like The Moon but the whole album is really really good.(Brett Dennen

I was watching TV last night, and I was bothered with the network’s plug for their 11PM news. It started off the normal way, promoting the lead story. That is fine. But then the absolutely annoying weatherman gets on and says something like, “We’ve had rain all day today. What will the rest of the week look like? I’ll tell you, tonight at 11.”

Have they thought that this just doesn’t make sense anymore? They no longer have an edge on the rest of society because they know what the weather is going to be like. Without even moving from my couch, I could have checked the updated weather forecast in two different places. (phone and computer)

How come TV networks are so slow to adapt to new technology. If I was in charge of that news channel, I would use those 30 second plugs as a chance to inform my audience, as opposed to plug the news show later that night by using a “tease.” I’d tell them, “We had rain today, but the rest of the week looks great with sunshine and no wind. I’ll tell you more at 11.” They should do the same with sports scores. Instead of, “The Rebels played the Wolf Pack tonight. I’ll tell you how they did at 11”, I’d say, “The Rebels had a victory tonight over the Wolf Pack. I’ll show you highlights at 11.”

I’m just saying, that i would be much more satisfied with a news channel that was informative ALL the time. (Also, if I was in charge of that news channel I’d fire that annoying weatherman. Mr Pfister, you’re not funny.)

(The Gem for this week is Naked As We Come from Iron & Wine. The whole album is great. (iTMS link)

This morning I was reading an article on CNN.com called “Tricks to remembering names.” There are some good tips there. I use a few already. For instance, I keep an up-to-date contact book like it is part of my religion. I like to have all contact information very organized and easy to draw from. I don’t like to lose friends on account of disorganization. (#7) Also, I will take a person’s name and try to associate it with a feature on their face or a famous person. (#5)

But there is another way that I remember people. Often times I will be able to remember a person by referencing what kind of cell phone or computer they have. “Oh, so-and-so,he’s the guy with the 12″ iBook.” I suppose this is because technology and gadgets are my area of interest and that is something that I am familiar with enough to remember easy.

Perhaps we all have something that registers easy when we meet someone.

For instance, my wife styles hair for a living. She recalls people by how long their hair is, how it is colored, or the style it was in. (Things that I would never notice…never…ever.) She remembers by their hair because that is her line of work and something that interests her.

My friend Richard studies and enjoys business and he seems to remember people by how they network to someone else. (I often call him “Rolodex Rich” because he’ll often help me place people that I don’t know, but know me. “Richard, do I know this person?” “Yes, he is a friend of Mike, who we met at that party at Michelle’s.”) He remembers by who they associate with because business networking is his area of interest.

How do you remember people?

(PS, the music gem this week comes from Jonathon Coulton and it is a nice acoustic remix of a great rap song. Take a listen here.)

I’ve written before about how there are some phrases that bother me. I need to add one more because it was brought to another level today.

We all get the call at some time. It starts, “Hey, did someone call me from this number?”. To which my response is usually, “Did someone not answer on this number?.” I just don’t like how the person calling assumes that 1) I can tell who it is by their voice alone 2) I know every call that everyone makes in the house. Well, this was brought to another level today. I answered my phone and the conversation was as follows:

Caller- “Hi, who’s this?”
Me- “Excuse me?”
Caller-” I just saw this phone number written on the top of my car and I wanted to know why it was there.”
Me- “On top of your car?”
Caller- “Yeah, I am about to wash my car and this number was written in the dust so I wanted to know why.”
Me- “Well, you got me. Where do you think it happened?”
Caller- “I don’t know. I live in Spotlight, NV. It was probably while I was at work.”
Me- “Wow, sorry, can’t help you.”
Caller-” well, what’s your name. Maybe I’ll know it.”
Me- “Randy Constan”
Caller- “Oh, well that doesn’t sound familiar.”
Me- “Well, go wash that car.”

I really hope that he goes home and puts my “name” in Google. He’ll end up at Randy Constan’s homepage and be sorry that he made that ridiculous call in the first place.

Some of you may have noticed the new feature in the sidebar that points to my photoblog. ( A photoblog is a blog that is regularly updated with photos.) I recently got my first DSLR camera and I really like it. The photoblog will be some of the pictures that I take. (With the most recent one being in the sidebar of this blog.) I have some neat trips coming up to Nauvoo, Chicago and San Francisco so I’m hoping to get some great pictures.

There is an RSS feed for the photoblog here. Also, there is a place (in the top left corner) to leave comments. But be kind. I’m still a beginner with this camera. I hope that I will get better as I get more skilled in using it.

You can get to the photoblog by clicking on the picture in the sidebar or by going to www.brianstucki.com/photoblog.

PS, By popular demand (meaning one request) I thought that I would include a music gem. This one comes from Kings of Convenience and is called I’d Rather Dance With You. I especially like it when they bust into the chorus.

If ever you have wanted to buy the domain of YOUR name (example: jamestaylor.com), now would be a good time. Yahoo is selling domain names for just $2.99 per year. That is really cheap. You can search available domain names here.

Note: You don’t have to use the domain, but buying it will let you have the rights to use it later on. I just bought a few for projects that I am working on for later.

It has been 100 years since Einstein introduced E=mc2 to us.( I don’t know how to make the little small 2 so if you know how to do it, let me know.) I have to admit that I have been quite interested in Einstein lately. Ever since visting Bern, Switzerland (where Einstein did alot of his work), I have been much more interested in the way he thought. PBS has an upcoming special on “the story behind the world’s most famous equation” and I am very excited for it.

While I was running last night, I was listening to ten top physicists explain the famous equation in two minutes or less. It was so interesting that I didn’t realize that I had been running for much too long. I’m sore today.

Even if you’re not interested in physics as a whole, you should listen to these different clips. If nothing else, it could really help you look smart sometime later. They make it really convenient to put it on your iPod for youre next walk.

You can find the clips here. 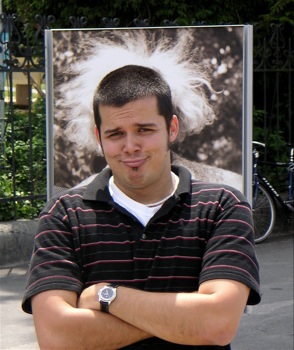