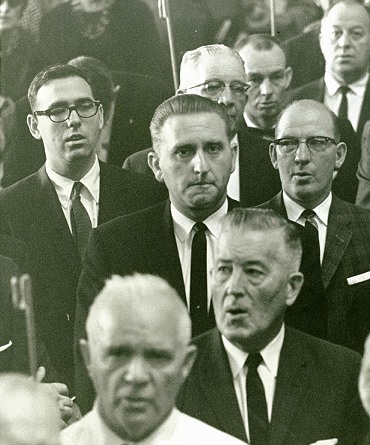 I love this picture of Thomas S Monson as he was sitting in the congregation of the old tabernacle. It was taken in 1963 just moments before he would be sustained as a member of the Quorum of the Twelve Apostles and invited to the stand. While others sit unaware and eager for the meeting to start, he feels the heavy responsibility beginning to fall on his shoulders.

Thomas S Monson, President of The Church of Jesus Christ of Latter-Day Saints and a man I sustain as a Prophet, gave his first talk as an Apostle at age 36. (The same age I am now. I can’t imagine.) He was the final appointee of David O. McKay to this Council. In his first talk he declared “I pledge my life. All that I may have.”

Fifty-three years later, he continues to keep that pledge.