A little while ago I read a tweet that talked about USPS mail and it’s ratio of usefulness. It read:

Snail mail is the worst.

99% is spam. A waste of paper, delivery gas, and attention.

1% is IF YOU DIDN’T OPEN THIS YOU WILL GO TO PRISON.

While I’m not sure on the percentages, it did make me laugh.

Did you know you can sign up for a free service from USPS called Informed Delivery and it will scan each of your incoming mail pieces and will email it to you the night before delivery. That way, you know which pieces of mail will be arriving and how quickly you need to head to the mailbox.

If you don’t like emails, there is also an app specifically built for the service.

To receive the emails, it’s a simple signup on the USPS site. Within a couple days, you’ll start receiving emails. If there are any pieces of email that can’t be scanned, the message will notify you of that as well. 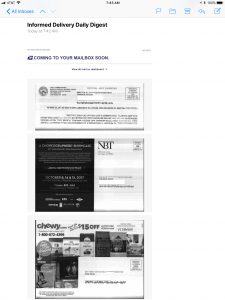 Speaking of “go to prison” letters, did you notice that the screenshot in this post includes a jury summons for Candace? It came the first day we opted-in for the service. It was a slow walk to the mailbox the next day.

Lynn G Robbins, who was a co-founder of Franklin Covey and now spends his full time in ecclesiastical service, recently gave a speech about being “100 percent responsible” for all parts of your life. He uses examples from scripture and also from his professional career to teach that being responsible “is to recognize ourselves as being the cause for the effects or results of our choices—good or bad.”

In the talk, he provides a list of nineteen things that people say or do when they are trying to avoid responsibility. (He also gives examples of each one.)

Once he has laid out some of the things to watch for in our life, he explains why it is we turn to this list of items:

If the anti-responsibility list is so dangerous, why do so many people frequently turn to it? Because the natural man is irresponsible by nature, he goes to the list as a defense mechanism to avoid shame and embarrassment, stress and anxiety, and the pain and negative consequences of mistakes and sin. Rather than repent to eliminate guilt, he sedates it with excuses.

I’ve seen some of these tendencies creep into my own life. I plan to do better.

He goes on to tell a story of his time as an executive at Franklin Covey. He mentions two men in charge of shipping items for seminars and how they had been mistake prone for some time in their work. Instead of firing them, he gave them an incentive plan on how they could earn monthly bonus money by being perfect in their shipments.

I enjoyed his management skill as he turns what could have been a poor experience into a real improvement for the lives of his employees. As he talked to them, and listened as they went through the excuses of the “Anti-Responsibility List,” he reminded them over and over again that they “are 100 percent responsible for that shipment’s success. Do you understand?”

The story ended well. After laying out all the ways that they improved, he concluded:

“What these two employees learned is that when they blamed someone else, they were surrendering control of the shipment’s success to ­others—such as the seminar division or the freight company. They learned that excuses keep you from taking control of your life. They learned that it is self-defeating to blame others, make excuses, or justify mistakes—even when you are right! The moment you do any of these self-defeating things, you lose control over the positive outcomes you are seeking in life.”

There is much more in this talk, including some application in his current assignment as a Seventy of The Church of Jesus Christ of Latter-Day Saints.

If you’d like to find ways to improve responsibility in your own life, the talk is available free in text, audio and video form here.